Artful dodging is behind these tree roots. I saw these roots today, and thought them worthy of a photograph. In post-processing, I went straight to black and white because I thought it suited the texture of the wood. The winter day was already naturally rather desaturated. I found the background to be too obtrusive, however. It’s busy, with all those branches. There’s not a lot I could do with the business. But, perhaps there was a way to de-empasize it. 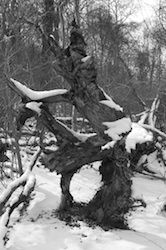 I was inspired by a post I saw on thephotoforum.com, specifically this image. The photographer made use of the dodge tool to significantly lighten the background. Now, dodging is nothing that will surprise any photographer who has spent any time in a darkroom or with Photoshop. In my case, though, it’s something I simply have not explored much yet. The forum post was kind of an aha moment for my black and white photography. I used the Dodge tool in Aperture to isolate the main subject, the roots. I made limited the strength of the dodge to keep it from looking too manipulated. There’s a point of no return with many of these tools where the result looks “computery-surreal,” to coin a phrase, with visual artifacts starting to pop up around hard edges, for example. In this case, the limiting factor was the dodge. It was very difficult to trace accurately the very irregular edges of the roots with the dodge tool. If I strengthened the dodge too much, it began to show where the dodge was not precise. There is precedent for the artful dodge; they say Ansel Adams true mastery was in the darkroom.