Here’s a handsome fellow. Spectacular blond hair! Yellow, really. Very yellow. He was crawling on a blackberry bush this morning. I initially identified him as an American Dagger Moth. However, upon further review, he is actually a Spotted Apatelodes, Apatelodes torrefacta. (This species also comes in white fur.) Per the caterpillar guide I was using, the key characteristics that set this caterpillar apart from several other fuzzy yellow alternatives are the red prolegs (those little feet on the abdomen that are not true legs.) The bright red feet are just peeking out from under the yellow hair against the blackberry stem. The blackberry stem has some red to it, as well, so they don’t stand out quite as much as they could. I did not notice his red feet when I encountered him in the wild. The yellow hair does a good job of hiding them; a photograph saved the day.

Note: If you encounter him, don’t pick him up. The hairs can cause an allergic rash. It is not a good idea to pick up most fuzzy caterpillars for this reason. If you do happen to touch one, be very careful not to touch your eyes or any other sensitive areas until you can wash.

The adult moth is also striking, not for his colors but for the very odd way his holds his wings far from his body. I don’t have a photograph of the adult, so I’ll refer you to Wikipedia’s article. I have also uploaded these images there for the greater good. Below is a second, dorsal view. Note the two anterior black “pencil” tufts and the single rear tuft, with short black bristles at each segment. Taken with a Nikon D90 and a Micro-Nikkor 60mm AF in available light. 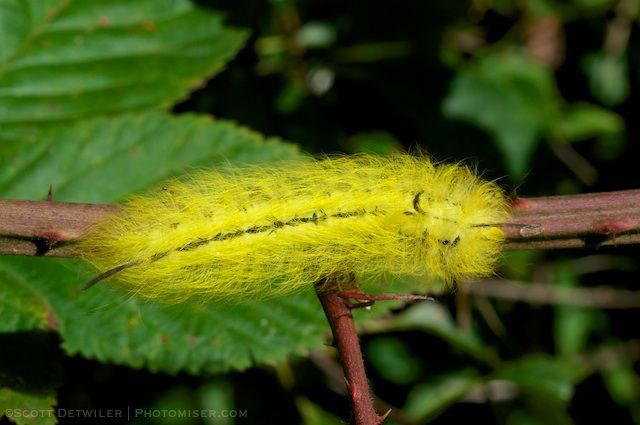