We are back to making things glow with this One Picture a Day post. We have a scallop shell backlit with a strong LED flashlight. The challenge was to light the shell properly without shadows. Fingers, for instance, showed too easily, even to retouch them out. I could have kept the fingers, but that really wasn’t the look I wanted. I wanted just the shell itself on a black field. I need to hold the shell so the light was even behind it. LED flashlights tend to have a strong, but narrow beam. I needed some distance between the light and the shell so that the entire shell was lit but with minimal spill over around the edges. Any structure I used to hold the scallop shell need to avoid casting shadows on the shell. This meant they had to hold the shell by the edges, not just prop it from behind. 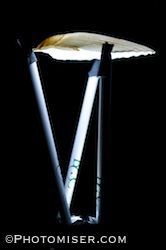 I constructed a tripod of sorts from pencils by strapping them to the flashlight with gaffer’s tape. This jig I then taped to the top of the tripod. I also taped off the portions of the pencils that stood above the shell to keep them from appearing in the shot. I moved the camera around from several angles to get the cleanest image. The pencils did cast very slight shadows on the very edge of the scallop where they touched; the uneven edge of the scallop helps distract from this, but you can probably see two of them if you look. The image was shot in a dark room with only the LED flashlight providing light.

In Aperture, post-processing was straightforward. I removed the few bits of visible jig using the retouch tool. I boosted exposure, recovery, highlights and saturation to being out more interest in the shell. I shot in RAW, which preserved plenty of information for those tools to work with. The camera was a Nikon D90; the lens, our recommended cheap wide-angle–and, it turns out, general all-purpose lens, the Nikon 18-55mm VR DX AF-S.