I went into Mammoth Cave with one lens, no tripod and no flash. The one lens was the Tokina 11-15mm ultra wide angle lens. I set the ISO to 6400, as high as it would go; left the aperture wide open at f/2.8, set the focus manually on infinity, and the focal length to the widest, 11mm. With the ultra wide angle, the depth of field was very cooperative. Auto-focus and even manual focus were all but impossible. The final images make it look like there was much more light than there really was. (I observe that even though light is limited in the cave, the brain has the wonderful ability to stitch it all together in memory. One remembers the cave as fully lit, even though it was never lit more than one part at a time. I particularly recall this from spelunking in wild caves, where the only light is a flashlight.)

Even at these settings, shutter speeds were too slow for hand-holding in most cases. The best shots were taken while propping the camera on any convenient stable surface. The tours move along at a brisk pace, so the best pictures were in spots where the guide stopped to discuss something at length–with a suitable firm surface handy. Very little time or flexibility to compose. I took quite a few shots, and the two featured are the best among them, such as they are. Mammoth Cave itself is mostly dry at the levels explored in the tours I took, so there are few fancy formations. The featured image really captures the very angular character of the cave here. 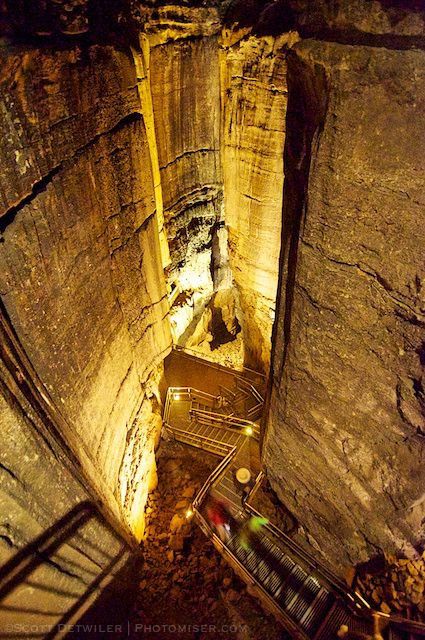