I continue to work on my ultraviolet photography technique with a visit to marsh marigolds. Marsh marigolds were my first “successful” ultraviolet subject last year when I first tried my equipment. Marsh marigolds display very prominent nectar guides in UV. This time around I feel I have a better handle on taking such photographs. The next challenge is post-processing; in the case of UV, that means a final picture that is not a study in purple. In today’s final version, the most useful adjustment was to use the Color tool in Aperture to desaturate the magenta tones. The main benefit was to reduce the prominence of the leaves which were competing with the flowers, and it brought out the paler tips of the petals. The other thing I was going for was to picture the entire plant, rather than just one blossom or two. 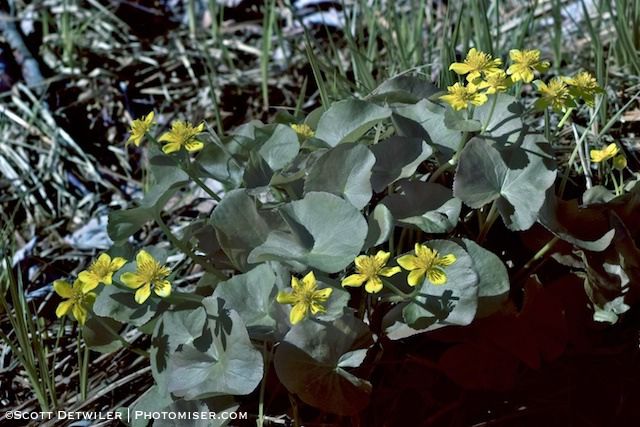 The full color image was taken with the full-spectrum camera unfiltered, hence the odd color shift. To get some semblance of green back into the leaves, I found that the Dynamics preset by SEIM did a decent job. Still a little more uncle-bob’s-1965-vacation-slides look than the real thing, but enough to give the viewer the idea of what the flowers look like in normal light. 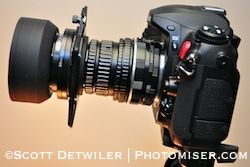 All images were taken with a Fujicolor FinePix IS Pro UVIR. The lens was an EL-Nikkor 75mm f/4N enlarger lens, which does not have a uv-blocking coating that normal lenses have. The lens was mounted to the camera on a short extension tube. I used a Nikon AF-1 gel holder, outfitted with reducing rings to accept an Andrea-U UV bandpass filter. The gel holder allows one to remove the filter by simply opening its hinge for focusing and framing, then just as quickly put it back, safely screwed in the entire time. Much better than screwing the filter on and off the lens directly. It’s an expensive filter; best to minimize any chance of dropping it!