This documentary image I prepared for Wikipedia article on Trillium erectum. Trillium erectum, common name variously given as purple trillium, red trillium, wake-robin or stinking benjamin, has two color morphs, red and white. In the particular location where these were taken in western Pennsylvania, both color morphs are present, but the white happens to be more common. The Wikipedia article mentions the white in an off-hand manner, with no illustration of the white version–until now. I wanted the white version to get some respect, so I created my own image while I had a chance with the season’s flowers. I have uploaded it to Wikipedia for the good of the order. 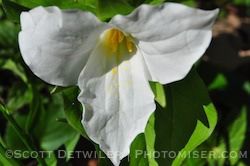 This is a composite image of two individual plants along the same trail. Note that both flowers have a deep red gynoecium. What? The gynoecium is the female center part of the flower including the ovary. It is surrounded (monoecious flowers) by the male parts, the stamens and anthers. (It’s a new word for me, as well.) The white version is easy to confuse with Trillium grandifllorum. In Trillium grandiflorum, the common large-flowered trillium species, this central area appears predominantly yellow, as shown in the photograph to the right (taken last year). The petals of Trillium grandiflorum are also a brighter white. The petals of the white form of purple trillium are more creamy or greenish white, though that difference is harder to see without the actual plants at hand. A third difference is that the green sepals are more prominent in purple trillium, the flower petals narrower and less overlapping. Finally, not depicted in the photographs is that Trillium grandlflorum tends to point its flower more upward to the sky; the purple trillium flower tends to droop, nearly resting on its whorl of leaves.

Today’s camera for the Trillium erectum composite image was the Nikon D90; the lens was the Micro-Nikkor 60mm AF f/2.8. Both taken in available light. Post processing in Aperture was auto-enhance and some burning to darken the background of the red version photograph. I created the composite in Pixelmator.

The red flower here is the same flower I photographed earlier this month, still in bud. I also note that by the April 4, 2012 date on last year’s Trillium grandiflorum, above, the peak of Trillium–just occurring now locally–is at least three weeks behind last year’s extraordinarily early spring.

One thought on “One Trillium, Two Colors”