It’s not a photoblog without at least one cat (and/or dog.) We made it through 31days of One Picture a Day before we got to the cat. But now her time has come. Rosie is very cooperative for the camera. Her roommate, Sox, has the uncanny ability to close his eyes every time I take his picture. Every.Time. I’m using a flash, and I suspect he has mastered the sync rate. So, he just gets a thumbnail, while Rose takes the headline. 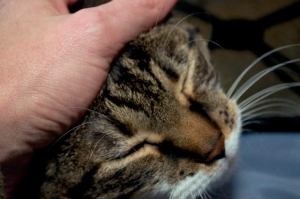 Rosie’s reward for not closing her eyes for a photograph

The flash or strobe unit I am using is the venerable SB-600 Nikon Speedlight. This flash has been discontinued at retail, but is readily available used and refurbished. I have looked over the features in the newer models, and I don’t see any need to upgrade. This is a big flash with an articulated head and a good throw. It has some zoom capability; it zooms itself when attached to the camera. I am photographing very close here, near the focus limit of the Nikon 18-55mm VR I am using. 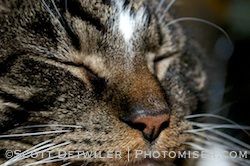 Sox closes his eyes for the photograph, again.

I needed keep the flash from overwhelming everything to give that “I USED A FLASH” look that is hard to avoid with point-and-shoot cameras. I also wanted to avoid eye shine. The height of the SB-600 flash helps. But for the best light, I directed the SB-600 at the ceiling, and popped on a diffuser. I use an empty rubbing alcohol bottle. I also dialed back the flash two stops. That was actually a bit much, leading to some underexposure. One stop would have done it, or maybe 1 1/3. However, I was able to use the Aperture adjustments to bring it back from the brink. I have been shooting RAW lately, which makes that kind of recovery a little more likely.