For the last several days, I have been photographing items in a shadow box, actually an old printer’s drawer. Today we finish the series with three at once, plus a single of a glass perfume bottle. I have featured the Sweet Pea perfume bottle in a recent post. Today’s three boxes include the bottle as well as the jaw harp from two days ago, and the flint and steel from yesterday. The three boxes shot was post-processed by lifting and stamping the Aperture adjustments from the original jaw harp of two days ago. For the solo shot of the bottle, I did the same, but backed off the exposure a little. It looked a little over-lit. 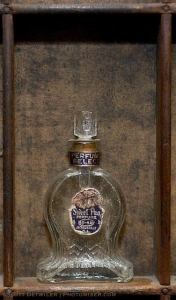 All images were taken with a Nikon D90 and the best cheap wide angle lens, the Nikon 18-55mm AF-S DX VR. I had it set to 55mm here today, though, not the wide angle setting. I wanted to back off the subject as I could in order to keep the flash from over-powering the scene. As in the previous two days, the ISO was 800 and the shutter synced to 1/60 sec, and the flash was a Nikon SB-600 SpeedLight set down three stops. The original was moderately underexposed in camera, but since I shot in RAW I was able to recover it nicely. And, I think the combination of pulling the exposure and the ISO 800 grain gives it a realism-painterly quality. By the way, I also adjusted the perspective in PTlens. I found it surprisingly hard to square the camera with the subject. All those hard vertical and horizontal lines of the box belie any lack of square with the camera. PTLens to the rescue. I downloaded PTLens about a year ago; I still have not quite used my free trial of ten saves. I don’t use it often, but it can be very useful in the right circumstance–especially when strong vertical or horizontal lines are distorted by the lens or, in this case, the photographer.