We have reached another milestone of spring. The toad tadpoles conceived in April are beginning to emerge from the pond. The first vanguard is lingering at the edge of the pond. They are absorbing the last bits of their tails, after which they will venture forth into the woods. Thousands of tadpoles remain in the pond waiting their turn. I believe this is the first day of this stage. It may have started yesterday. The fact that there were no toads farther than a foot from the pond suggests it has not been any longer. By tomorrow, they’ll be in the grass heading away from the pond in haste. The farther they get from the pond, the larger they grow. By the time they reach the nearby buildings in midsummer they will be one robust inch.

I took this with a Nikon D90 and a Nikon 18-55mm AF-S VR. I would have preferred my Micro-Nikkor 60mm AF, but  I did not have it along. Natural events like these are so ephemeral that I did not want to risk waiting. This is cropped  somewhat, but it’s pretty good for a kit lens. The 18-55mm focuses pretty close, which is an advantage over other kit lenses with a longer telephoto range.

Post-processing worked hard on bringing more light to the toadlet, somewhat lost in shadow as the light skin of my hand tended to fool the camera into underexposing the toadlet itself. I concentrated on the eye, dodging and sharpening it more than any other part of the toad. Shadow recovery did a good job with the body of the toad under the circumstances. 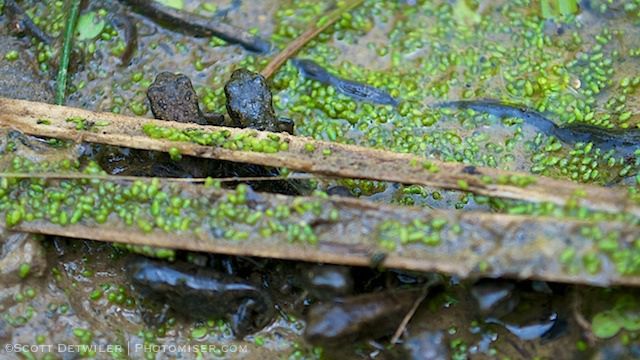