Wide angle fun today. I recently purchased a Tokina 11-16mm ultra wide angle lens. I have been looking for chances to try it out.

The gray weather today is not good for color or landscapes, so I went looking for black and white architecture. This boat house tower has been a subject before for me for experimenting with lenses and black and white. For additional comparison, here is an image from an earlier visit with other equipment. In this earlier image you get a better perspective on the actual proportions of the tower with less top-bottom distortion. 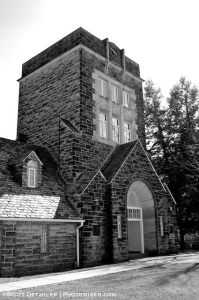 First of all, I must say that the 11mm end (DX) is really wide. I am just a few feet away from the tower, yet the whole thing fits with room to spare. Second, the distortion on the uncorrected image is extreme from this close. It’s an effect that has its place, but like fisheye it’s sort of a special place that isn’t something you’d use routinely.

I took the image into PTLens for perspective correction. You can see the result in the righthand image above. At first when I finished it, I thought that those front doors looked awfully small, and the tower looks like it was hulking over the ground floor. But then I measured it. In the earlier photograph from a side angle, you’ll see that the front door (not counting the arch or the transom) is about the same height as the first set of windows above it, counting all the glass. In the PTLens-corrected image, lo and behold the front door is the same size as the glass of the windows above it as well! So, the corrected image is giving a relatively accurate view of the proportions of the tower. I suspect my initial thought that there was more distortion than really exists is actually a fault with my own brain’s perceptions. We look at things from ground level, things higher up look smaller than they really are. When confronted with the true proportions, our brain gets skeptical. I notice a similar effect with road signs. The look much smaller than they are, until you compare the width of a car ahead of you with the width of the sign it’s passing. Those speed limit signs on the interstate are as actually wide as the car!

The camera was the Nikon D90. The lens was the Tokina 11-16mm, a wide angle lens for APS-C (DX) sensors. Post-processing was in Aperture, using Mono X by SEIM preset, plus some fiddling with other typical settings.