I take this photograph every winter. Witch hazels are small trees that usually grow next to shady streams. They bloom at odd times. The Pennsylvania native species blooms into November. A southern species, the Ozark witch hazel, blooms in late winter. This particular tree is a hybrid of the two. It’s probably bred for hardiness, but also I suspect for its prodigious blooms. Our native witch hazel does not have nearly the density that this tree has. This tree starts blooming with any hint of a thaw after early January.

We had a warm spell in January during which our tree opened; we even saw honeybees gathering from the blooms. It continues to bloom even through the cold snaps; the blooms seem to shrink and brown, only to burst forth again with the next warm stretch. Consequently, it often gets covered in snow, the blooms and snow in an odd juxtaposition. Last night we had a sticky snow, the wet kind that falls when it’s just barely cold enough to snow. It collected along all the twigs and branches, and witch hazel blooms. It’s a pleasant sight, though, offering hope for spring.

I used three lenses in this session, to show the effect of the different focal lengths. The first two are using the Micro-nikkor 60mm f/2.8 AF. The third used the Nikon 18-55mm AF-S DX VR, at 18mm. The last one uses the Nikon 70-300mm VR zoom, at 300mm. The first two lenses are on our short list of the best values in Nikon lenses for the budget photographer. The 70-300mm VR is an upgrade; the Nikon 70-300mm ED the best non-VR long zoom and would do a similar good job. All images were taken with a Nikon D90. 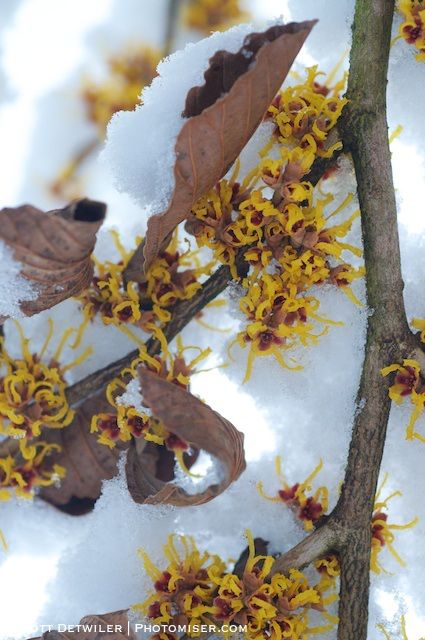 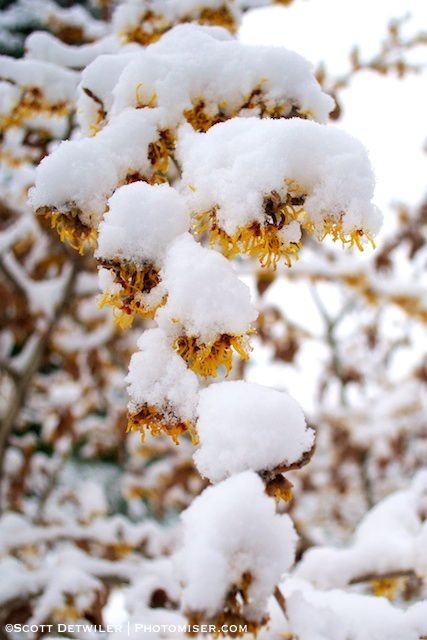 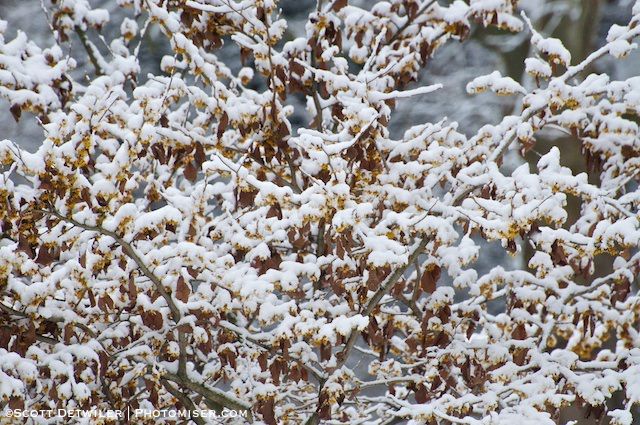 The challenge here, as always is getting the snow right. It seems brilliant white to the eye, but grey in the camera. One problem seems to be that the reflection of light tends to fool the light meter in the camera into thinking its has more light that it really has. So, today, I stopped up one exposure. We still get a lot of gray, so its off to post-processing in Aperture. After an auto-enhance round, I visit the Levels tool, expanding the tonal range by bringing the low and the high adjustments inward. After that, I found success increasing the contrast until some of the snow went full white, but then going to highlights tool to dial back the blown out highlights. I’m not saying I’m completely successful here, but I am learning.