The Nikon 60mm f/2.8D AF Micro-Nikkor is not only my Nikon macro lens, it’s my favorite lens in general. In Nikon lenses, only Micro Nikkors offer true macro. The Nikkor 18-55 DX and 70-300 zooms do not focus close enough for macro. Zooms sometimes label their closest-focus as “macro” but nothing beats true 1:1 macro. The 60mm f/2.8D AF Micro Nikkor has the best price and quality combination of Nikon macro lens options. It’s an older AF, so a pin drive camera is required. It is still made and available new at over $500. That’s not so good a deal when you can find the current version Micro-Nikkor 60mm AF-S G ED new for under $600, used $425. The older AF lens’s main advantage to the Nikon bargain hunter is that it has been around forever so that the 60mm f/2.8D has a strong used market where it can be found “Used-Very Good” for under $300. (My version, pictured, happens to not have the “D” designation, which will save you a few more dollars, but the “D” is a minor improvement.) You are more likely to find an AF-D anyway. The newest AF-S version will give you the on-lens auto-focus motor and take away the manual aperture ring for your extra money. 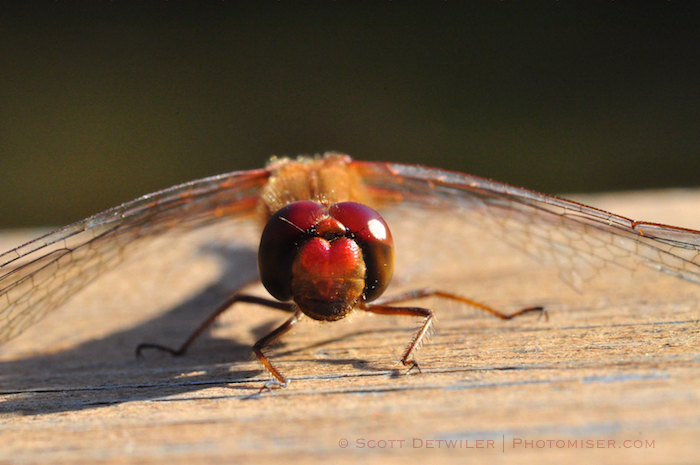 The trade-off in Nikon macro lenses for the get-the-most-out-of-every-lens crowd is the working distance vs. general utility. The closest competitor for a Nikon macro lens is the 105mm Micro-Nikkor Lens in its several generations, older and new. The 60mm means the macro working distance is pretty close, 8.75″, which can be a disadvantage, particularly for live subjects. Conventional wisdom says the best minimum macro focal length (i.e., has the best minimum working distance) is 105mm, at 12″.  I have found the 60mm to work just fine. It’s a little trickier to sneak up on insects, but flowers don’t care. The 60mm AF is a “sleeper” lens that is very capable but overshadowed by more popular lenses. Even if you go for the latest generation 60mm AF-S, you’ll still save money over the 105mm but still get a lot of functionality.

60mm with its f/2.8 makes a good portrait lens as well. The 105mm is, too, but 105mm is 150mm with the DX crop. Longer focal lengths for portraits are often favored because you don’t have to stand so close to your subject, which helps them relax. On the other hand, in a decent portrait studio or outside the 150mm equivalent is workable, but in tighter quarters, such as inside houses for family shots, you’ll have your back to the walls. And, as we discuss in the telephoto section, anything less than a 200mm telephoto is not very compelling as telephoto.

The 60mm is also more compact than the 105mm, making it easier for a SB-600 in the hotshoe to clear the lens in macro, one less reason to buy an expensive macro flash. For me, the 60mm AF remains the sweet spot.

The holy grail of macro photography for Nikon is the 200mm Micro-Nikkor. If you need to ask how much it is, you don’t need it.

The generation equivalent to the 60mm AF D is the Nikon 105mm f/2.8 AF Micro-Nikkor Lens

, with or without the “D.” The longer focal length gives a longer working distance over the 60mm. See the above discussion. Like the 60mm AF-D, it requires a pin AF drive. Prices on used 105s AF have come down in recent years. It is starting about $325 used–quite reasonable in comparison to the 60mm AF, actually. New 105mm AF-S pricing is a different story.

The least expensive Nikon macro lens option for DX is the Nikon 40mm f/2.8G AF-S DX Micro NIKKOR, $300 new, released summer 2011. However, that focal length means the macro working distance is half that on the already-short 60mm. If you want macro for only for occasional use, then this may be a good choice. It makes an excellent all-purpose lens. On the other hand, the 18-55mm focuses pretty close, as well. Not macro, but not bad. I wanted a little more out of my macro, so I spent less than $75 more for a used 60mm AF-D.

The Nikon 85mm f/3.5G AF-S DX ED VR Micro-Nikkor is available for over $500 new, $400 used. Vibration Reduction is not really a big deal with macro work. The 85mm has a slightly better working distance than the 60mm, but is darker with maximum aperture of f/3.5. Reviews suggest it does not have the quality of other Micro-Nikkors, though it’s still pretty good. The old 60mm is f/2.8 for more flashless utility, and is better-built for less. On the other hand, a longer lens like the 85mm is preferred by portrait photograhers.

A well-regarded third-party lens for macro is the Tokina 100/2.8 ATX Digital Ready 1:1 AF-D Macro Lens for Nikon USA, $450 new. You’ll need a pin-drive camera, but you’ll get a better working distance. The 100mm is nice for portraits, but with the DX (ATX in Tokina terms) crop factor it starts to get unwieldy in close quarters for casual people shots. No VR, either.

The 60mm also a good portrait and general-purpose lens. Sharp, and f/2.8 means it’s pretty bright, too. However, if you want to save a few hundred dollars and macro is not as important to you, but you would rather have more low-light utility, consider one of Nikon’s excellent 50mm f/1.8 generations. The several versions of the f/1.8 50mm over the years are all excellent lenses in the $100-200 range. All are very sharp and economical. If you have a pin drive camera, consider the old 50mm F/1.8 AF, only available used, or the Nikon 50mm f/1.8D AF Nikkor The D is available new for $125; you might save $25 buying used for either. If do not have a camera with a pin drive, look for the Nikon 50mm f/1.8G AF-S NIKKOR; also excellent, but $225 new. Many people also like the Nikon 35mm f/1.8G AF-S DX Lens for Nikon Digital SLR Cameras. On a DX with its crop factor, it acts like the standard 50mm lens on a film or FX camera, where what you see in the viewfinder matches matches the unaided eye, i.e., no magnification of zoom or reducton of wideangle. $200 new.