A Longhorn Milkweed Beetle (Tetraopes tetrophthalmus) hides behind his dinner. Like many beetles, his usual escape maneuver is to drop and roll when danger approaches. This one was so intent on his meal of a young, tender milkweed leaf that his only recourse was to freeze to blend in somehow. Well, a bright red beetle is never going to blend in. He put up a good try, though, but even then his long antennae, which gives him part of his common name, belied his presence. Below is the same beetle in full reveal.

These beetles are braver than some. The alkaloids in the milkweed sap are present in the beetle, make him an unpleasant meal, like the monarch butterfly. His bright red is a signal that he has a defense other than hiding. (Red Milkweed Beetle is another common name for the same insect.) They usually wait until actually touched or their leaf is shaken before they let go. These beetles typically eat the tips of milkweed leaves, as has the present example. Interestingly I just learned in researching this post that the antenna actually divides the eye in this particular beetle family. This can be seen on the photograph below. The genus name, Tetraopes, means four-eyed. Feel free to use that word at your next recess bullying session. 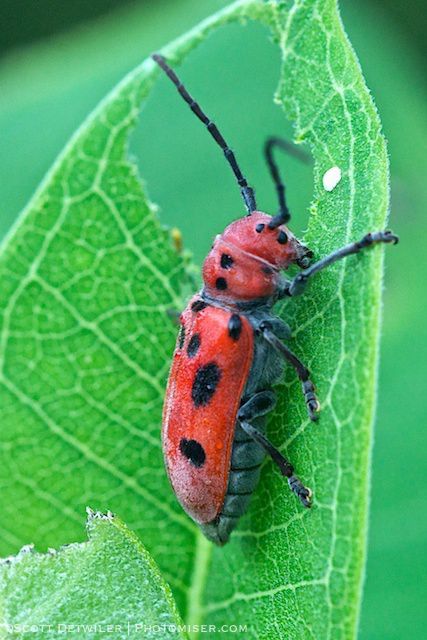