We recently purchased a Merax One Shot Photo Studio. In the past, I’ve made a light box out of cardboard; and another out of plastic pipe fittings and a sheet, with lighting cobbled together from my workshop. They worked as lightboxes, but were not very portable or storable. I have seen this Merax product recommended by others. It is very inexpensive. I was ready to upgrade to something portable and easy to store. I don’t do much light box work currently, so something cheap and compact is enough for my incidental uses. It comes with a tabletop tripod, two lights, a fabric light box, a two-sided fabric backdrop and a carrying pouch. The whole set-up tucks away nicely in its pouch. The pouch has room for a small power strip, too, which you may want to add. 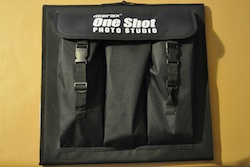 For the Merax One Shot Photo Studio, I Iike everything about it except the mini tabletop tripod. It must be made for a point-and-shoot because my Nikon D90 and a lens is just too much for it. The ball head of the tripod is very floppy and hard to tighten. I wasn’t absolutely sure the screw I was using to tighten the ball head was indeed intended for that purpose, but it was the only adjustment I could find. It was also very tippy with my camera. Also, even with a point-and-shoot, it is too tall. At its lowest setting, it is very close to the top of the box. It should be half its height at its lowest setting, and telescope to the top of the box. That way it can used at all levels of the box. As it was, I could not get it low enough to take the straight-on shot of the snowman cookie jar. I handheld it. That’s not ideal because you want good depth of field and low ISO for clear product pictures, and handheld limits exposure times. If I were going to spending an extended session, I would have to use a regular tripod with the studio at the table edge. UPDATE: I since have cut the tripod tubing down to half its original length. It does not tower over the box as badly, but the head is still weak and it’s tippy with a DSLR.

Another thing I’d like after using this several times is a black background cloth. It has white and blue. I believe the blue is intended for their software that cuts out backgrounds, which is fine. But I’d personally have more use for black.  I have made due by using the studio’s bag itself, though it does not work as smoothly as the dedicated cloth. Obviously, a piece of black cloth is easy to purchase, but it makes the whole thing a little less than an all-in-one studio.

Today’s One Picture a Day subject is pedestrian. One of our goals for the One Picture a Day project is to learn our equipment, so not every shot is going to be National Geographic worthy.  Today was about playing with the new studio. For the Snowman Cookie Jar, I set the camera on auto. The white color of the jar needed some restoration in post-processing. In Aperture I adjusted the white balance, reduced the red channel slightly, and boosted the exposure. It’s still a little pink in the white areas; removing the red there tended to washout the hat and scarf. I think the spot saturation brush would take care of this if I were to revisit it.

I know my lightbox work needs more practice, but National Geographic is still welcome to the cookie jar shot if it needs a cover or anything. Reasonable license terms available!

One thought on “Merax One Shot Photo Studio Review”