Here’s a moment in time. We had a heavy, wet snow last night, on a pond that had just barely thawed the day before. It left a layer of icy slush–or slushy ice–on the surface of the pond. The geese swam through it like arctic icebreakers. To the right side of the photograph is a straight runway where the geese apparently slid  on the ice with both feet to land. The weather conditions, and wildlife, had to be just so for all this to happen.

In a similar just-right-weather vein, we have some tree branches. What’s neat to me about these is how the are lit so well from underneath, as though light were reflecting from a pool, or a flash. In this case, the branches were lit by sunlight reflecting off the snow. 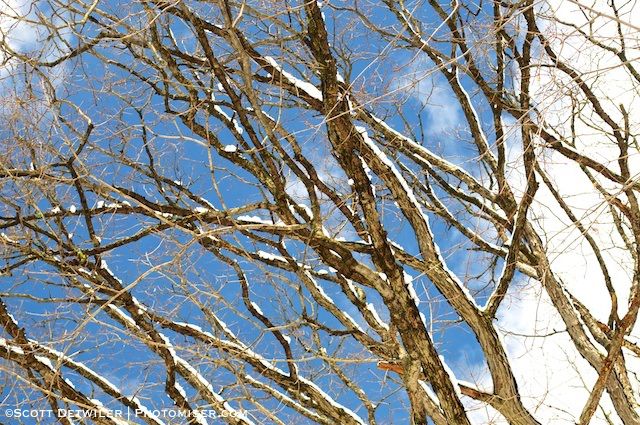 Of the two photographs, I think the slushy pond is more interesting. However, I cannot resist photographing the big oak trees or blue sky!

Both photographs were taken with a Nikon D90 sporting the Nikon 18-55mm AF-S DX VR kit lens. This lens is frequently included with a camera body “kit.” Many people unload it for a more expensive lens, so this lens is readily available near-new for less than $150. Even pros say it’s sharp, but its plastic construction is not going to last for a pro. Nonetheless, for the “prosumer” who wants to take great pictures without tying up hundreds in lenses, it’s the best cheap wide angle. I figure if I wear it out, then I have proven that I need a better lens. (If I drop it, that’s another story…I probably don’t deserve a better lens!) For now, it’s enough, and it’s a great value.