Happy Birthday, Ansel Adams! In tribute to Adams’ birthday today, I went outside to photograph in black and white. I did not have any dramatic landscapes handy, so I decided to channel something like Young Oaks in Winter. I at least had some winter to work with, even if I did not have the Yosemite Valley. Now, I’m not going to presume to approach Adams’ skill here. I’m not worthy to tie his boots. I just wanted to think about how he would see my world if he were here. What would he find compelling to photograph? What dark-room wizardry would he perform to make that sucker pop the way no one else could make black and white pop?

Ansel Adams was famous for the sharpness of his photographs. To my best recollection I have never seen a print of his in person, but I’d love to do so now with a loupe in hand. Anyway, I tried for some post-processing to fake that sharp look. Ansel would not have minded; I’ve heard it said that his true genius was in the darkroom. After all, hundreds of thousands have taken nearly the identically-framed photograph of the Yosemite Valley, but no one can match the bite of Ansel’s image.

For the Ash Tree Trunk above, I desaturated the original RAW color image. (I shot in RAW to keep the maximum information for post-processing manipulation.) The main steps were to slide the Definition slider pretty hard, then play a bit with the various contrast settings. I did apply a third-party preset, Mono X by SEIM. Also, in honor of Adams, I also used the Dodge brush to lighten the background. For the Sassafras Trail image, I did not dodge anything. 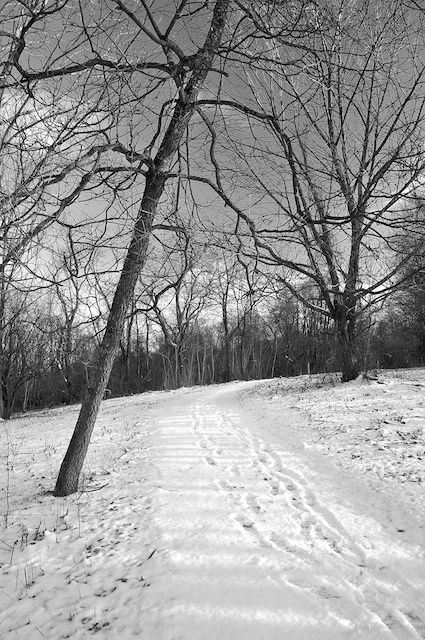 Both images were taken with a Nikon D90 and our favorite best cheap Nikon wide angle lens, the Nikon 18-55mm DX VR AF-S. Ansel didn’t use a wide angle lens, but I’m not too worried about that.