Infrared post-processing is the topic for today. We have two versions of the same picture, with different degrees of post processing for you to compare.

For my visible light photography, I don’t do much post-processing. I grew up on film photography with no darkroom, so I got what I saw when I took the picture (hopefully.) I keep that philosophy today, trying to make the act of taking the picture where I do the most creative work. Infrared and ultraviolet photography are not well suited to that. We are using spectra that are normally not visible. Our modified camera arbitrarily assigns some sort of visible color to the invisible spectra. It’s all fake, in a sense. Post-processing takes on a much larger role even for a film-trained purist. Well, you can can take them straight out of camera if you like, but they all tend to look the same, lots of whites and reds in infrared, and a very purple cast in UV. The goal, though, of UV and IR photography is to see what you normally cannot. Post-processing is necessary to make really compelling UV and IR photographs, in my opinion. Since we are working in light we cannot see, there’s a lot of judgement call. On the other hand, since there is no “real” color here, there’s no way to say what’s right and what’s wrong. Today’s two photographs are an example of that. More on that in a moment.

Here’s how I do my infrared. I use a UVIR modified Fuji IS Pro with a 720 nm infrared filter. In camera, I set the custom white-balance using green grass in sunlight. In the Fuji IS Pro, I have this setting saved. However, I usually shoot RAW in UV IR for maximum processing flexibility, so the white balance can be changed later. I still keep it in camera because that way as I am viewing shots I’ve taken on the camera’s viewscreen I get a better idea of what I have. The Fuji IS Pro is very sensitive to IR light, so I usually stop down a full 5 stops in sunlight.

Back in the studio, I use GIMP’s ufraw utility for the initial import. ufraw allows me to adjust the white balance. (Aperture, my main catalog and editor, will not import Fuji IS Pro RAW.) Even setting white balance in camera I tend to get a lot of pink and red. ufraw’s auto-white balance usually strips the rest of red cast out. Then I export into something Aperture can use, jpg more often than not but I still keep the RAW file as well.

In Aperture is where I play with colors, mainly playing with RGB curves. Converting IR to black and white is kind of a common practice, but I like the effect of color in an otherwise IR shot. I try to get blue skies or some other non-pink color that has a connection to a real color I might see in the same scene in normal light. It makes you pause for a moment while your brain sorts it out.

Today I took a simple picture of a house plant, a snake plant (Sanseveria spp.). The featured photograph above is edited in Aperture. I played with the RGB color curves to increase the contrast as well as to introduce some color, particularly bringing out a hint of mottling in the leaves. The centermost leaf is blown out, unfortunately; even in sunlight from the window in an otherwise dim room the IR is almost too bright for the camera. The photograph below is the original, after white balance adjustment but before playing with false color in Aperture. Which one is better? I don’t know. You be the judge. I like them both for different reasons. There are no rules about color in invisible spectra. 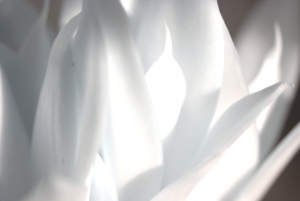